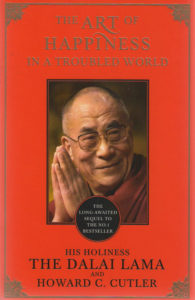 Howard Cutler is an American psychiatrist who met the Dalai Lama when he visited Dharamsala, India (site of the Tibetan government in exile) in 1982. This book is based on Cutler's conversations with the Dalai Lama. The text is written by Cutler, and contains extensive quotes from the Dalai Lama. The final text of the book was reviewed by the Dalai Lama's English interpreter, Dr. Thupten Jinha.

Though the Dalai Lama has spent a great deal of time in the West, conversing with Western experts and acquiring insight into Western science and culture, he is the product of a very different culture. Even when he is saying something that sounds relatively simple and straightforward, we need to bear in mind that the English terms he uses may be rather loose translations of the Tibetan terms in which he thinks. At some points in the book this is clear, as when Cutler relates the fact that there is no Tibetan word that precisely corresponds to the English word guilt. At other times the cultural problems are in the background, as for example when the Dalai Lama is totally unfamiliar with the idea of self hatred. Possibly this exposes a hole in the Dalai Lama's experience, but it is also possible that it exposes a deep and subtle difference between the ways that the Dalai Lama and Western psychologists use the word self. In general, I recommend giving the Dalai Lama the benefit of the doubt. If something he says seems like obvious nonsense to you, consider the possibility that he is using these words very differently than you would use them.

There are those who think it might have been better that the Dalai Lama had written his own book and see Cutler as an unnecessary influence but the opposing position does seem to have credibility i.e. Cutler asks questions that are intriguing to the western mind. And his narration that runs through the book is useful. He also summarises western scientific research that supports the points that the Dalai Lama makes which is helpful in assessing the credibility of some of the Dalai Lama’s remarks. Finally, his own views, given that he is a psychiatrist, are not without merit. And so if you’re interested in examining the contrasting positions between the East and the West on a subject that concerns us all, this may well interest you.