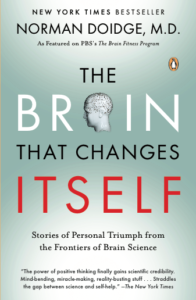 The discovery of neuroplasticity, that our thoughts can change the structure and function of our brains, even into old age, is the most important breakthrough in our understanding of the brain in probably four hundred years.

The science is called neuroplasticity. It means that our thoughts can change the structure and function of our brains. The idea was first introduced by William James in 1890, but it was soundly rejected by scientists who uniformly believed the brain is rigidly mapped out, with certain parts of the brain controlling certain functions. If that part is dead or damaged, the function is altered or lost. Well, it appears they were wrong.  The developments in neuroscience have illuminated the fact that the brain is more resourceful and adaptable than first thought and can and does reinvent itself in accordance with its environment and experience.

Dr. Norman Doidge introduces principles we can all use to overcome a number of brain limitations and explores the profound implications of the changing brain in an immensely moving book that will permanently alter the way we look at human possibility and human nature.

Doidge leads the field in an extraordinary era for popular-science books about the brain.... He has managed, in the opinion of his peers, to do that in a way that is accessible to all.  He helps us to understand that positive thinking really does change your brain and this is not in a hyperthetical sense, but literally in the way that it's wired!

Neuroplasticity now enjoys wide acceptance as scientists are proving the brain is endlessly adaptable and dynamic.  It has the power to change its own structure, even for those with severe neurological afflictions. People with problems like strokes, cerebral palsy, and mental illness can train other areas of their brains through repetitive mental and physical activities. It is completely life-altering.

So what does this have to do with positive thinking and with you?