If you've ever been stressed out, you may have attempted to relieve your anxiety in a number of ways: eating, logging hours in front of the television, or increasing your use of tobacco, alcohol or drugs (both legal and illegal). All of these represent attempts to take your mind off your worries, or in some instinctual way to alter your brain chemistry a bit. And sometimes it works.

However, many of our go-to strategies - like gorging on chocolate ice cream or having an extra glass or two of wine - also have negative consequences, especially when carried out repeatedly. In the long run, some behaviours undertaken to increase happiness can actually decrease it. There is another strategy for reducing stress and improving mood that not only seems to make people happier, but also yields positive long-term effects more conducive to long-term happiness... exercise.

When we walk, run, cycle or engage in some other form of physical exercise, we generally seem to feel happier and less anxious. It’s not that people who are in poor physical condition can’t be happy because of course they can be.... one study of Stanford University student-athletes found that happiness for this group was more a result of their personality and temperament than it was of athletic prowess (see the work of Katherine G. Denny and Hans Steiner). However, there are certainly aspects of physical fitness that grease the wheels of happiness and need to be taken seriously.

In addition to increased energy, physically active people may feel a sense of accomplishment in meeting personal fitness goals. Also, they may feel proud of the improved physical appearance that those hours in the gym have produced. And getting outdoors on a nice day - or even working out indoors around a bevy of strangers - stimulates the mind and shakes up what may be for some people an otherwise monotonous existence.

But is there a direct link between exercise and happiness? We know that exercise has been shown to improve the sleep patterns of insomniacs, as well as lower their anxiety (see the research of the American Academy of Sleep Medicine). Studies on rats indicate that exercise mimics the effects of antidepressants on the brain. Exercise is also responsible for the creation of new brain cells in the part of the brain responsible for learning and memory.

Interestingly, happiness and exercise are similar in two notable ways: both are independently associated with a boost to the immune system, and also with the release of endorphins.

Both exercise and happiness lead to increased production of antibodies, which are a special type of protein produced by the immune system. When everything is working normally, antibodies arrive on the scene shortly after antigens - bacteria, viruses or other unwanted invaders - are detected in the body. Antibodies hunt them down and bind themselves to the antigens. Once locked on, T-cells - the immune system's "killer cells" -arrive and destroy the antigens.

Antibodies stick around in the body after they're created in case the particular antigen they were designed to hunt shows back up. Antibodies also help produce other cells that aid and assist in the immune system.

People who are happy are more resistant to diseases ranging from the common cold to heart disease, while stress and anxiety tend to make people more susceptible to sickness, including diabetes and stroke (see the work of Sheldon Cohen PhD, William J Doyle and others). Happiness has been shown to increase antibodies by as much as 50 percent (see the work of Marci Shimoff and Carol Kline).

Exercise is no slouch, either - it has been shown to increase antibody production by as much as 300 percent! Exercise also directly increases the number of T-cells in your body. By increasing numbers of "hunters" (antibodies) and "killers" (T-cells), it's no wonder a workout keeps you healthier. And since people who exercise tend to report higher levels of happiness, the exercise-induced happiness improves the immune system independent of the physiological effects of the exercise.

One of those beneficial effects is the lowering cortisol of levels in the body, a hormone that's released when your body experiences stress. A little bit of it helps the immune system, but too much weakens your ability to fight illness. The fact that exercise decreases the level of cortisol in your body may also explain why it decreases feelings of anxiety.

There can be too much of a good thing, however. While exercise bolsters the human immune system overall, intense exercise actually weakens it in the recovery period that follows the activity (see the work of Kapasi, Catlin, Joiner and others). This is not an uncommon occurrence with elite athletes, and seniors especially should keep in mind that intensive exercise may weaken their resistance to disease.

Studies have shown that meditation increases antibody production and, simultaneously, feelings of happiness. This may in part be due to meditation's similarities to what we traditionally perceive as being exercise, namely breath control, focus, and the tuning out of external stimuli.

Just as antibody production is connected to both exercise and happiness, so too is endorphin production.Endorphins are chemicals that are able to cross through the gaps between neurons in order to pass along a message from one to the next. There are many different kinds, and much remains to be learned about their different purposes and functions.

One thing is known for certain about endorphins: their ability to make you feel oh-so-good. When your body is subjected to certain stimuli like sex, food or pain, your hypothalamus calls for endorphins, and the cells throughout your body that contain them heed the call. When endorphins lock into special receptor cells (called opioid receptors, because opiates also fit them), they block the transmission of pain signals and also produce a euphoric feeling - exactly like opiates. 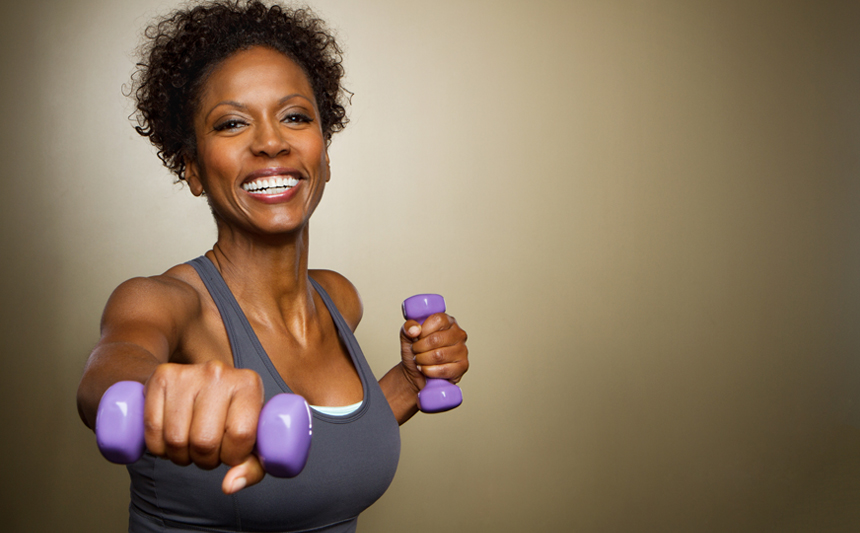 Endorphins act as both a painkiller and as the pay-off for your body's reward system. When you hurt yourself (or eat a hot chilli pepper), you may get a big dose of endorphins to ease the pain. You may also get an endorphin blast from talking to a stranger, eating a satisfying meal or being exposed to ultraviolet light. (Everyone has different amounts of endorphins, and what may trigger an endorphin rush for one person could very well produce a dud for someone else.) The pay-off in the form of your body tapping into its own stash of "opiates" is to let you know you've had enough - and convince you to do it again sometime soon.

Exercise stimulates endorphin production as well, but for a different reason. You're probably familiar with the term "runner's high," which refers to the euphoric feeling one sometimes gets when exercising. Researchers have found that light-to-moderate weight training or cardiovascular exercise doesn't produce endorphins, only heavy weights or training that incorporates sprinting or other anaerobic exertion.

When your body crosses over from an aerobic state to an anaerobic state, it's suddenly operating without enough oxygen to satisfy the muscles and cells screaming out for it. This is when the "runner's high" occurs.

So it’s time for us to start taking the link between exercise and happiness seriously. Find an activity that gives you some pleasure and you’re likely to sustain it, and there you’ll find happiness.