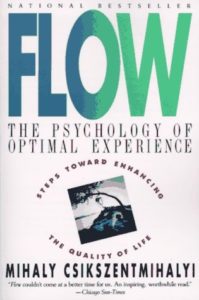 In his seminal work, Flow: The Psychology of Optimal Experience, Csíkszentmihályi outlines his theory that people are happiest when they are in a state of flow— a state of concentration or complete absorption with the activity at hand and the situation. It is a state in which people are so involved in an activity that nothing else seems to matter. The idea of flow is identical to the feeling of being in the zone or in the groove. The flow state is an optimal state of intrinsic motivation, where the person is fully immersed in what they are doing. This is a feeling everyone has at times, characterized by a feeling of great absorption, engagement, fulfillment, and skill—and during which everyday concerns are typically ignored.

Csikszentmihalyi characterized nine component states of achieving flow including “challenge-skill balance, merging of action and awareness, immediate and unambiguous feedback, concentration on the task at hand, paradox of control, transformation of time, loss of self-consciousness, and autotelic experience.”  To achieve a flow state, a balance must be struck between the challenge of the task and the skill of the performer. If the task is too easy or too difficult, flow cannot occur. Both skill level and challenge level must be matched and high; if skill and challenge are low and matched, then apathy results.

Also see: Mindfulness and The Art of Appreciation.