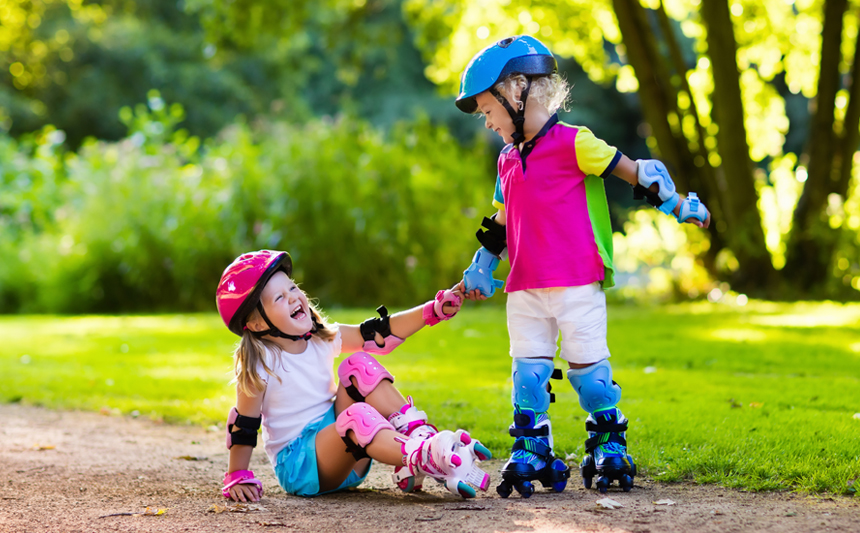 When we’re motivated by a true spirit of generosity, we benefit as much as those on the receiving end. Jesuit priest Anthony de Mello says it this way: “Charity is really self-interest masquerading under the form of altruism. … I give myself the pleasure of pleasing others.” In the same vein, the Dalai Lama playfully speaks of working to benefit others as “selfish altruism.”  But don’t just take their words for it: Research in neuroscience and psychology has offered scientific evidence that helping others brings happiness to yourself.

Consider:
According to the measures the “Social Capital Community Benchmark Survey,” overseen by researchers from Harvard University, those who gave contributions of time or money were “42 percent more likely to be happy” than those who didn’t give. Psychologists have identified a typical state of euphoria reported by those engaged in charitable activity. They call it “helper’s high,” and it’s based on the theory that giving produces endorphins in the brain that provide a mild version of a morphine high.

Research at the National Institutes of Health showed that the same area of the brain that is activated in response to food or sex (namely, pleasure) lit up when the participants in the study thought about giving money to a charity.  At Emory University a study revealed that helping others lit up the same part of the brain as receiving rewards or experiencing pleasure.

Though the benefits we get from compassion are clearly rooted in our biology, there are also ways we can systematically deepen our compassion through formal practices. As a meditation teacher, I haven’t been surprised to learn that modern neuroscience research suggests that focused meditation is one of the most direct ways to activate and strengthen those areas in the brain that increase empathy.

In his laboratory at the University of Wisconsin, Richard Davidson has done extensive research on the effect of compassion meditation on the brains of student volunteers who had done the practice for one week, as well as Buddhist monks who had done thousands of hours of such meditation. In this particular kind of practice, the meditator becomes completely focused on experiencing loving-kindness and compassion for all beings. In her book Train Your Mind, Change Your Brain, Sharon Begley reports the results of the functional MRI brain scans Davidson took of participants in one of his investigations:

During the generation of pure compassion, the brains of all the subjects, both adept meditators and novices, showed activity in regions responsible for monitoring one’s emotions, planning movements, and positive emotions such as happiness. Regions that keep track of what is “self ” and what is “other” became quieter, as if, during compassion meditation, the subjects . . . opened their minds and hearts to others.

I’ve seen Davidson’s research corroborated by the experiences of students of mine. One of those students, Stephanie, told me how meditation changed her perspective. “Instead of getting so caught up in What about me? you do a little more of What about you? and that changes everything,” she said. But she also found that this shift didn’t make her neglect her own needs or collapse into another’s pain. Instead, she has discovered,

When you tune in to another’s suffering and send out compassionate thoughts to them, rather than draining you, it actually fills you up with more energy. You seem to clear out the confusion of your small mind and replace it with something much more vast and vibrant. Under all the chatter in your mind, there’s a basic goodness you touch that’s deeper and more profound. When you let down the fear, you get filled up with that basic goodness and sweetness of your caring heart.

But compassion practice doesn’t have to be limited to formal meditation. Throughout your day, whenever you see someone having a hard time, you can tap in to that place of caring inside you and send out thoughts of compassion. Or you can take bigger steps, sometimes when you least expect to.

Consider the story of Spring. By the time she was thirteen, Spring was well on her way to trouble. With her father out of the picture, things were hard at home and school wasn’t much better. One day she was caught stealing. It was her good fortune that she was only ordered to do community service. Her mother sent her to volunteer at a local church that is well-known for its generous and successful social service programs. There Spring found herself in a new world, in more ways than one. She was serving meals to the homeless, side-by-side with former addicts and prostitutes who were now clean and sober. To her surprise, she says, “I felt all this love, and it was beautiful.”

The very first lunch she served to the destitute and homeless turned out to be a transformative experience for her. “I went to the refrigerator and saw packs and packs of hot dogs, stacks and stacks of bread that looked really old, and these giant cans of pork and beans,” she says. “I remember thinking, is this lunch?”

It was a cold day and Spring started wondering if anyone would show up. In fact, when it came time to serve, she looked out the door and there were hundreds of people in a line that seemed endless. As they came through the line, “I noticed that everyone looked so sad,” says Spring. “They all had their heads down.” At first the cook told her to give each person two hot dogs, two pieces of bread, and two scoops of beans. After a while as people kept arriving and the line still went on as far as could be seen, the cook announced, “One hot dog, one piece of bread, one scoop of beans.”

"I started to feel a sense of desperation as people kept coming through, holding their kids, with tattered clothes, hair uncombed, and hoping for some food". Before long the cook came out again and said, “Half a hot dog, half a piece of bread.” And then we ran out of food, and there were still more people in line. Spring watched for a long time as people drifted away, still hungry. Later, after she’d helped clean up, she went outside and sat down on the curb in front of the church.

"I started sobbing, thinking this is not right. What struck me most of all was how much I cared. I cared about all these people I didn’t even know. I cared about the kids. I cared that they didn’t get food, that it was cold, and where would they would go? I just sobbed and sobbed. I’d never felt like that before."  Even though she was used to seeing homeless people in her neighborhood, being face-to-face with so many in such need had a profound effect on her. Spring says she was changed after that. “Something deep within me was affected by it all.”

What Spring went through was a deep encounter with suffering that is a kind of initiation onto the path of compassionate action. Keeping your heart open in the face of suffering is not easy. We often want to run away from such pain. I think even that impulse proves the point that we care. We feel the suffering of others, and it is often painful because we don’t know what to do. Sometimes what we encounter can be so overwhelming that remaining present with it can seem impossible. But when you can’t close your eyes anymore to the pain, and you recognize how deeply you care, that is the awakening of the compassionate heart.  Thich Nhat Hahn, Buddhist teacher and activist, makes the point that compassion does not stop with letting our hearts feel the suffering of others. “Compassion is a verb,” he stresses. Compassion and action go hand-in-hand.

Indeed, in those same MRI scans of monks meditating on compassion, neuroscience researcher Richard Davidson discovered that the areas of the brain responsible for planning action also lit up. In Train Your Mind, Change Your Brain, Sharon Begley quotes Davidson reporting his results to the Dalai Lama: This was a novel and unexpected finding . . . There’s no physical activity; they’re [the meditating monks are] sitting still. One interpretation of this is that it may reflect the generation of a disposition to act in the face of suffering. It gives real meaning to the phrase “moved by compassion.”  Not only are we wired for compassion, we appear to be wired for compassionate action. When we see suffering and feel compassion, it is natural to want to do something in response.

Spring, now in her twenties, is considered a pioneer in bringing mindfulness-based meditation practices to youth and communities of color at the East Bay Meditation Center in Oakland, California, which she cofounded and where she teaches. She has also taught yoga and meditation to young people in juvenile hall. Having once been a troubled teen herself, she understands the experiences of those who end up there, and she can respond without judgment and without distancing herself from their suffering. The need and pain she saw that day serving lunch to the homeless and destitute opened her to the rich rewards of compassionate action.

Buddhist teachings use a term that encompasses all these qualities of compassion and altruism: Bodhisattva. This ancient Sanskrit word means 'a being who is headed for enlightenment', and specifically refers to those who aspire to that lofty goal for the purpose of liberating all beings from suffering.

The idea of liberating all beings from suffering sounds like a stretch. But working to benefit others is something any of us can do. So I like to call those inspired by this vision of relieving suffering and increasing happiness “Bodhisattvas-in-Training.” They do the best they can, and in the process learn how rewarding and beneficial it is to express their caring heart.

When we become Bodhisattvas-in-Training, we set ourselves on a path toward a life that is meaningful and fulfilling. A young friend of mine named Aline is living proof. She has been engaged in environmental protection and community development in countries like Senegal, Peru, Romania, and Ukraine. Yet despite all her work, she still witnesses heartbreaking destruction. “In Siberia, 60 percent of the logging in the formerly pristine region where I lived is illegal,” she told me. “I would see trucks and trucks of logs going to China. It was really painful.”  Yet no matter how many challenges Aline has faced in her work around the world, she says she’ll continue doing this kind of service for the rest of her life.

I think it’s a very human thing to want to serve. It feeds something in the soul. If people look honestly, living their values counts more than money. If you’re not aligned with your values it eats at you. When you are, something in you grows and comes alive. Each one of us has our own hidden purpose inside, and needs to uncover it and give it wings. Service is one of the things that gets us in touch with that most natural and true part of ourselves.

As Richard Davidson’s neuroscientific research on compassion meditation suggests, the natural response to seeing someone in distress is the impulse to help. We care about the suffering of others. And we feel good when that suffering is relieved. Whether we’re involved in compassionate action ourselves, witnessing heroic actions in a movie, or reading about noble actions, a caring response to the suffering of others lifts us up. As Aline puts it, knowing that she’s making a positive difference in people’s lives is “one of the best feelings I’ve ever known.”

Also see: What we get when we give